Last Friday saw us on the train to Liverpool to see the World Museum exhibition of ‘China’s First Emperor and the Terracotta Warriors’. I have heard that the reason the exhibition came to Liverpool this year rather than any other UK city, was that there are many Liverpool FC fans in China (known as ‘The Other Red Army) who campaigned for it. Liverpool has a very longstanding Chinese community, older than that in San Francisco. The warriors were discovered quite by chance in 1974. It estimated that there are around 8,000 figures and horses in total but only 2,000 have been excavated so far. We were seeing a very small sample of those. There were a number of displays of ancient Chinese history and the rise of the Qin dynasty. The Chinese Empire was bigger than the later Roman Empire. The tomb complex was huge, larger than the Valley of the Kings in Egypt. In addition to the warrior figures, there were horses and chariots, helmets, armour, weapons and items needed in the afterlife. 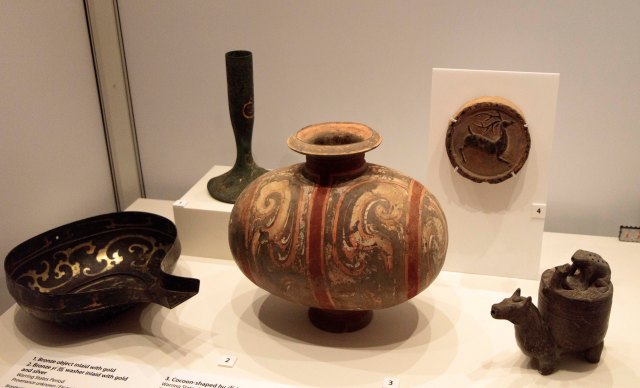 Other displays focussed on the Han Dynasty, the Silk Road and items which probably found their way to China via that route.

The warriors were perhaps the most striking items on display. A lighting display of how the tomb might have looked in it’s setting:

We left the exhibition via a walkway with Chinese lanterns suspended above it.

Outside the sun was out, buskers were playing in the street and the city centre was busy. A group of people including the Merseyside Chief Constable, were abseiling down wires suspended from the Radio City Tower. Unfortunately they had just landed so I could not get a photograph of them. On the train back to Crewe, a guy was having a dispute with the train manager about the price of his ticket for the short journey to Liverpool South Parkway station. We began to wonder if the matter would be resolved before we got to his station but it was. The Terracotta Warriors exhibition continues until October so there is still plenty of time to see it.