After a service in the multinational English-speaking church in Bordeaux, we waved goodbye to our friends on the Rocade as they headed to the market in Pessac and we headed north. If we’d had more time it would have been more interesting to avoid the autoroutes completely but we did cut across to Angoulème to avoid the very heavy traffic going north. Seeing a car belching black smoke from the exhaust reminded me of a journey from Biarritz to Caen ten years ago when an injection hose split on our car and we had to limp along accompanied by black smoke as we had to get on the ferry that night. No such problems on this journey and we had time to have a quick meal at the port before checking in. 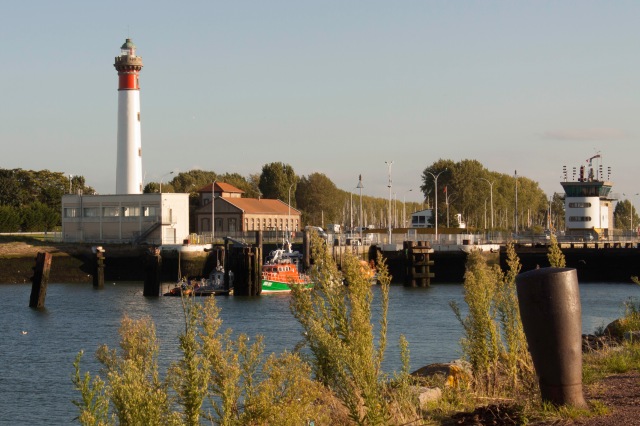 It was a lovely evening and the lighthouse, brightly coloured fishing boat and lifeboat were just asking to be photographed. The incoming boat was a bit late so we amused ourselves people watching. One older couple had come back from having a meal and thought their car had been moved. To everyone’s entertainment it was discovered where they had left it, in the pre-check in lanes. The armed customs officers were searching every car and Sasha the drug sniffer dog was also very busy. As there had been a big equestrian event in Normandy that weekend, there were several huge, expensive-looking horseboxes on the boat. All the HGVs were being checked for hidden people by a guy with a carbon dioxide monitor. It made me think how desperate people must be to go to such lengths to escape their situation. Fortunately all the lorries were OK and eventually we boarded. The next morning we arrived in a very dreich Portsmouth, the weather only improving as we left the motorway in South Cheshire. Back home now until the next trip.